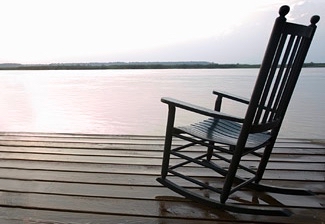 Last night, I did the bedtime routine with the boys.

Clean teeth or not, we turned out the lights and crawled into bed. I tucked Theo into his batman sheets; Woody, Pape, and Mike Wyzowski all safely in reach.

Jay man wailed from his pack and play, forlorn in the absence of mom. Dad is, apparently, only awesome until the lights go out.

I love you Lord, and I will lift my voice

To worship you, O my soul, rejoice

Take joy my king in what you hear

May it be a sweet, sweet sound

In your (commence sticking finger in and tickling while bellowing) EAR!!!!

Giggles abounded. Works every time. (As an encore, I recommend additional verses ending with “NOSE!!” and “MOUTH!!”)

Jay man got upset again. I scooped him up and let him lay on my chest in the glider.

We rocked and sang Come Thou Fount.

Jayber found a nook in my forearm and started to doze off. Theo began releasing slow, steady breaths.

So there I sat, rocking my son in the calm, quiet gray.

On a day (and a week…and a year…a life?) filled with screens and stresses and deadlines, my mind was rarely so undistracted. There were dozens of tasks to accomplish in this moment of spare time. But there I sat, attending only to the steady exhalations of dozing toddlers.

I lingered still, ignoring the lawyers in my mind who accused me (quite convincingly) of wrongdoing. Of laziness. Sloth. Neglect. They brought to mind how productive I needed to be with this children-free evening. They filled me with dread as I thought of the tasks that would go undone, the people who would be let down.

This only strengthened my resolve. I began to see my stillness as a rebellion; this reverie as revolt.

Today, in reflection, I’m able to see that hour with greater clarity. What I see is that it was the most productive hour I’ve had in months. It was productive because I was present. Completely present. And presence is productive. In the most meaningful ways, at least.

That hour last night—that singing of songs, that laughter, that holding and having—was a sacred hour.

What a fascinating, heartbreaking epiphany—to discover, as if by way of a sage, what ordinary men have always known—that sacred space is human space. That relationships, friendship, and the human encounter is the highest aim of mankind.

You can build a company. You can go viral on YouTube.

But if you don’t sit in a quiet room with kin, sharing only the silence, the air, and your mutual affection for one another, then you haven’t lived a fully productive, human life.

Lord, help me to live.